Inclusivity is something I learned from my bio Mom, Dr. Sandra Ellen Colombo-Stempien, and it was from growing up in a mixed racial family that I learned what love is. Love is accepting, acknowledging, and celebrating your differences. I also learned this lesson from a second Mama, Mrs. Cynthia Murray Cook Brassert Bowman Burgoyne. It was from this amazing woman, who could not bear children of her own, and adopted all of her children including myself and biological sister after my Mom’s untimely passing when I was eighteen years of age. Both of these women had flaws, one with flaws that are extreme and an inability to work on our relationship, and the other was from a deep fear of losing more of ones she most loved in the world. Each, in their own way shaped the woman I became today. Growing up in a multi-lingual and multi-racial family, although I myself am white presenting, enabled me to truly see that love knows no bounds when we recognize and celebrate our differences, and love one another as human beings. This is one of the major reasons why I have been so outraged by the hate crimes that have occurred, particularly towards Black individuals, indigenous persons, and other people of color (BIPOC), as well as my fellow LGBTQIA+ community (I am a proud member of as a Cis-Gender Female Bi-Sexual).

The racism that has been allowed to go unchecked due to our ex-president’s past four year racist, misogynistic and fear mongering reign has continued, and escalated, long standing racial division and has embolden many to engage in hate crimes against women, BIPOC individuals, and people of the LGBTQIA+ community. This got me thinking about the Feminist Lens, as well as Feminist writers, and how this literature could possibly help bring some healing to you all. As such, I decided to write this blog post for all y’all out there (you know who you are) looking to learn, grown, and become better humans. I also write this to honor all those of color, multi-cultural, multi-racial backgrounds like myself, and my hope is that in doing my part to continue to speak out and continue this conversation partly fueled by my honest rage at these heinous crimes….but mostly from my heart wanting people’s pain to be healed and racism to be eradicated that I am able to make a small contribution to the #AntiRacist movements currently on-going. So here goes…. 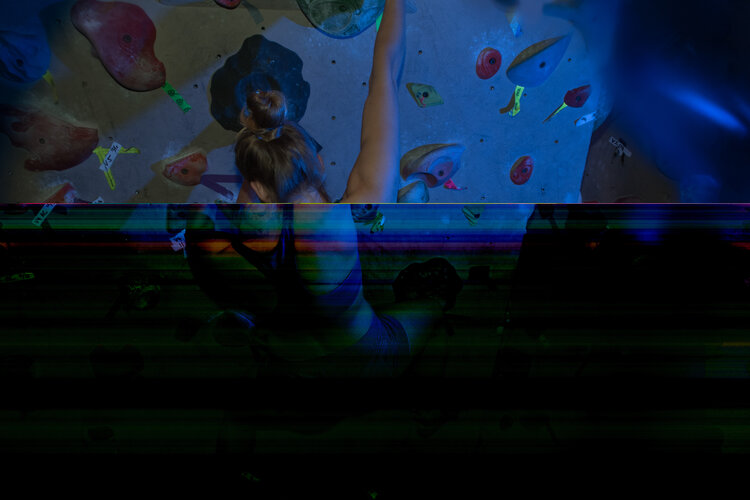 Ien Ang’s 2001 essay, I’m a feminist but… ‘Other’ Women and Postnational Feminism, brings an interesting perspective to the bilateral unity of what it means to be two different races, some white/caucasian mix, and differential thoughts of the races. Ang believes firmly that her being a Chinese American woman enables her to voice her opinions in a way that opens up the acceptance for all Chinese American Women. “As a woman of Chinese descent, I suddenly find myself in a position in which I can turn my ‘difference’ into intellectual and political capital, where ‘white’ feminists invite me to raise my ‘voice’, qua a non-white woman, make myself head.”(Ang, Pp.394) This statement rings true, is extremely intriguing when considering my sense of self coming from quite a mixed background, knowing that every woman comes from a different situation, and has different uniquely lived experiences in our own social atmospheres. The belief that women are united through a global sisterhood solely because we all share the same anatomy falls short. Every woman’s racial, cultural, and sexual background is unique, which brings to question if the whole rationality that we are bonded by our plumbing extremely controversial, as some women are born with the wrong genitalia, and so I think that this set of thought processes needs to be updated to today’s vastly different personification of what gender, and womanhood is.  The short answer is that it doesn’t. The idea that our differences and similarities can’t be solved through the action of discussion is also one of Ang’s statements, which in the end is circumstantial due to our own lived experiences, and backgrounds. There are a ton of highly educated white Women that are racist and misogynistic as fuck because they felt they had to conform to the patriarchy in order to get what and where they wanted to in their lives. 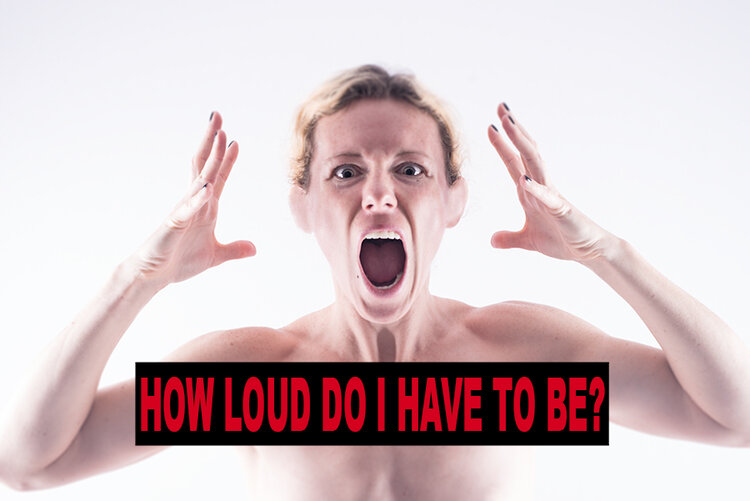 NORNSLIFE ART | DACD, Untitled, How Loud Do I Have To Be?, Self-Portrait, December 2016

I believe that the only way to truly unite women is to be able to look at all of our differences and recognize the intersectional layers of oppression that exist as a result of those differences; through acceptance, through love, and the unification of this shared pain should come in the fight for #EqualPayNow, #EqualPayForWomen, and total equality within society at all levels. The unification of women comes in our coming together to fight for our rights including the right to control our own bodies, which is the most important, and is utterly disgusting that we are still having to fight for this right solely because we aren’t men/identify as male. The lenses, historically, that society were taught to see through were dictated by the misogynistic patriarchy that historically have fought to suppress women on all levels, make us feel, believe, and act less-than. Unfortunately, these historical taught values are laden full-up with prejudices, influenced by generations of racist white hatred, bigotry, and upbringing. Luckily, what was taught can be unlearned, which is an essential undertaking, and would facilitate a world that could grow from kindness and acceptance.

Ang jumps from racial wars, unknown placement of mixed women, to Madonna’s ability to use her sexuality as a tool to dominate men and rape; essentially using her body and it’s various levels of nudity in performance to take back Female Power from the patriarchy and society’s historical view of the Woman’s body for something to consume or own (ancient dowries brought with women in marriage and women seen as mere property without rights comes to mind as an archaic example). It is quite baffling that most people wouldn’t connect Madonna wearing her lingerie on the outside purely to take power back from the male. Further more, “the slogan does not speak to men (who are commanded to take ‘No’ for an answer), but also implicitly summons Women to take up the fight, to join together in this fight that states when a Woman says ‘No’ she means No when she says it.(Ang, Pp.398) This brings to question, male artists historically using the female body, the female form in their own art to gain notoriety within the art community, and gain immense amounts of wealth once successful. The women, who sat for the these men for hours, were often subjected to sexual harassment and received no royalties as the art world was and remains a male dominated forum. Female artists work four times as hard, have to put up with sexist misogynistic bullshit, we get paid a fraction of the amount as men for our work, and we are lucky to end up in the heavy hitting galleries or museums even if we use our own naked bodies within our art. This makes me think of the awesome badass Japanese female photographer Yurie Nagashima. Nagashima once one of the few women in the 1990s who were able to fight their way into Japan’s traditional photography world, which historically and then, presently was dominated by men and their male masters.(Aperture 225, Pp.72) Nagashima was one of the few Japanese Women Photographers that blatantly confronted the historic gender expectations of the Woman as had been previously established by male Japanese photographers. Her self-portraiture assisted artistic reality photographs were and are still ground breaking, using her own body, nude, and clothed to grapple with her own female identity and continue to speak out for the rights of the Japanese Woman. She is a total badass and y’all need to check out her work! 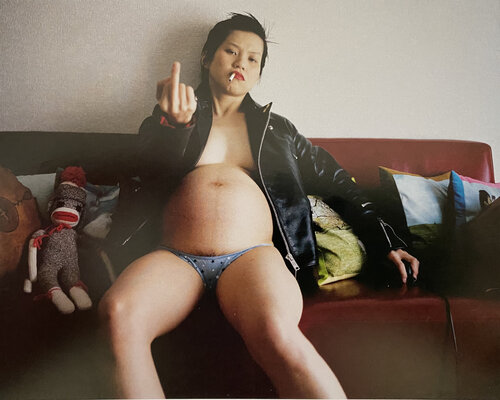 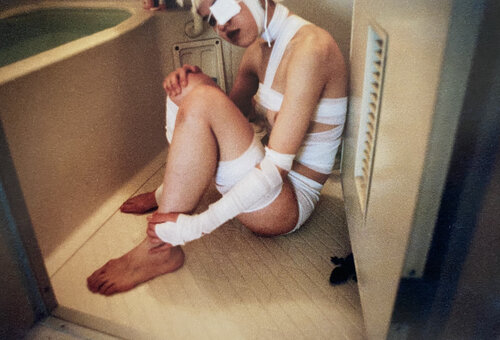 A woman’s femininity, frail qualities, which are often overlooked in men due to #ToxicMasculinity upbringings is usually used as a justification for rape, hate crimes, and is absolutely bullshit! It doesn’t matter how feminine, tiny, and or beautiful a women is or what she is wearing. No means NO! It is egregious, when a Woman or any human says no to sex and is raped. These toxic men that partake in ignoring the ‘No’ to deserve to be imprisoned for life. These men fear Women, they fear what will happen once we all recognize, and believe what has been true all along; WE ARE NOT INFERIOR. We deserve equal pay, equal rights, control of our own bodies, and to not have to deal with the bullshit of to the toxic masculine gaze any longer. 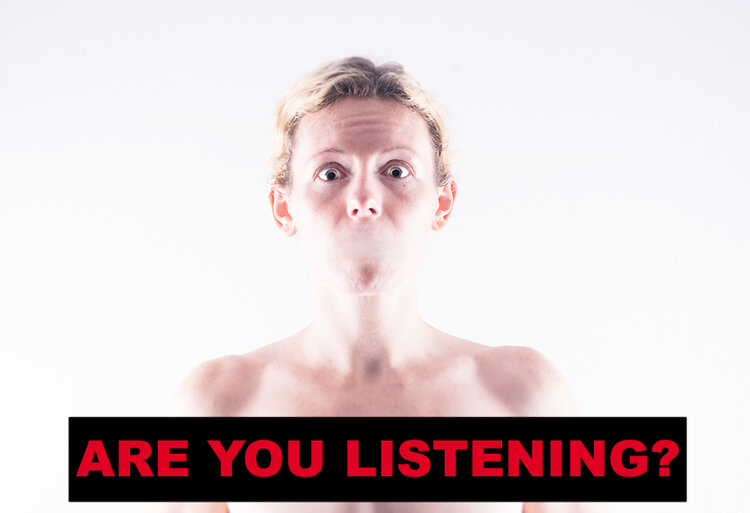 Get it together America and END THIS RACIST* BULLSHIT! *and, while we’re at it, the misogynist, ableist, classist, homophobic, every other -ism/-ist.