An Artist's Thoughts on The History of Sexuality 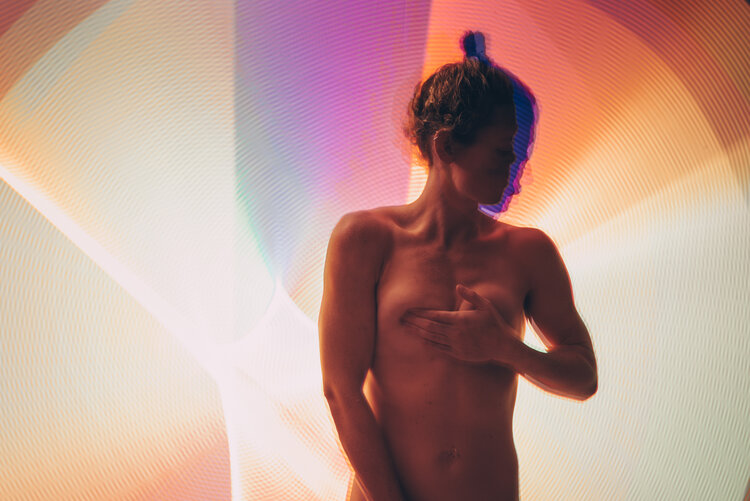 Michael Foucault argues that in modern European societies (eighteenth-late twentieth century), that sexuality is not characterized by repression, but in actuality is a “veritable discursive explosion”(Foucault, 1990, p.17). Foucault touches on this in his work The History of Sexuality, and examines this discourse further through the question; “A censorship of sex? There was installed rather an apparatus for producing an ever greater quantity of discourse about sex”(Foucault, 1990, p.23). I began to wonder, how then as visual artists can we embody the explanation of the development or the effects of this “explosion” of the discourses of sex when, in fact, historical constructs of gender and sex are archaically outdated for the period we current live in? History demonstrates sexual repression of varying levels throughout the centuries, yet it has always been the sacred duty of the working visual artist to cross these barriers, represent truth through our own eyes, and break down negative societal stigmas surrounding this discourse. Each decade, each era, we are presented with a different perception of appropriate forms of sexuality designated by that time periods perception of appropriate sexuality dictated by usually conservative society norms. These norms lead to furthering “Otherization”, hate crimes, and turn about deeper seeded issues. Why is it that certain individuals throughout history have been able to enforce these negative oppressions and how much harder to we, as working visual artists, need to push freedom and acceptance before history stops repeating itself?

The woman’s objectification was not only in the household, but in the bra’s she was forced to wear.

Michael Foucault believes that sexuality was not characterized by repression but by an explosion, which took place after more people began to rebel against societal conformities and beliefs. For generations the repression of sexuality was actually due to the political and economic era that we were living in. Over each decade within the twentieth century the repressions of sexuality leads to explosions of the people and artists rebuking against these negative societal stigmas. In 1968, women burned their bras to fight back against the perception that women were weak, bound by their gender, and only good for two things; being wives and bearing children. This paved the way for sexual freedom, and free love of the 1970s, and the 1970s made way for progress by opening the path for the swinging gay rights movements in the 1980s. During this time period we have artists such as Vito Acconcis', Seed Bed, Yao Yao Kusamas’, Sex Obsession Food Obsession Macaroni Infinity Nets & Kusama, and Carolee Schneemanns’, Interior Scroll. These three artists created performances that were meant to shock, confront, and get the populace to reconsider their own definitions of sexuality and gender constructs. Fighting against repression and historically archaic censorships of sex and sexuality. Traditionally, the woman’s role was seen to be in the household, to her husband, and children. It was the man’s job to say when he wanted sex, sex was taboo, not talked about, self-pleasure was just as repressed, and not seen as proper subjects to discuss comfortably. “The marriage relation was the most intense focus of constraints; it was spoken of more than anything else; more than any other relation, it was required to give a detailed accounting of itself” (Foucault, 1990, p.37). The woman’s objectification was not only in the household, but in the bra’s she was forced to wear. The pointy cup that made her breasts more attractive to her husband. It wasn’t until the 1960’s when the women’s movements for rights began to take off “and explosion” where women wanted to say that they were sexual beings equal to men, that women’s bodies were their own, and this led to the Bra Burning. Women finally began to not wear bra’s, be open that their sexual beliefs, and needs.

For centuries, there has been historical documentation of same sex relations between men/men, women/women, transgender, gender fluent, and heterosexual acts that included men and women. The Greek’s prized the Innersex individuals above all else in society because they had the ability to experience pleasure in all ways, as their bodies constitution had multiple sexual organs. Up until the nineteenth century, however, this was seen by un-educated or conservative sects of society as something not “normal” (i.e., negative, and not conforming). It wasn’t until the beginning of twentieth century that homosexuality began to be seen as taboo, out of the ordinary, unnatural, and gays began to be repressed even more into the closet. “Sex was not something one simply judged; it was a thing one administered. It was in the nature of a public potential; it called for management procedures; it had to be taken charge of by analytical discourses” (Foucault, 1990, p.24). The sexual repression extended to speech, not being allowed to speak of sex openly, to speak of being gay, and or having sex outside of marriage. Luckily this ended in the 1960s, to some extent, and by the time the 1970s rolled around another “explosion” occurred. The sexual freedom and Free Love of the 70s, swinging, and orgies roared.

A disease, a form of what people believed to be, The Gay Plague or Cancer, was starting to be more opening spoken of by the 1980s, and again the negative cycle of historical repression due to a lack of accessible knowledge that wasn’t freely spoken about. The coupling of non-heterosexual, gay people was starting to become more open, but by 1984 the public found out that HIV/AIDS stemmed not only from the gay community but the heterosexual one as well. “People often say that modern society has attempted to reduce sexuality to a couple-the heterosexual and, in-sofar as possible, legitimate couple” (Foucault, 1990, p.45). As more and more gay couples, gay artists began to come out, demonstrating to society that same sex people could have healthy loving relationships just like hetero couples, society unfortunately backlashed, and forced the oppression and closing of the LGBTQ+ individuals doors again. As an explosion of gay couples coming out to the world, saying they were as legitimate as the heterosexual couples in society, and society as a result deemed anyone to be seen as different, Other, was unorthodox, and not legitimate. It seemed a fight artists would have to continually fight against, to keep raging against this disgusting cyclical that seemed doomed to repeat itself after gaining historical context.

Over the past few centuries’ sexualities have gone through numerous changes as to what is and what is not considered acceptable by society, usually this acceptance has been due to the targeting of certain religions deeming individuals less than because of the way they were born, and as a result illegitimate. Going from the courageous act of rebellion, coming out, to being torn apart by society for being seen as different due to one’s choice of sexual coupling/s. This morphs into only seeing heterosexual couplings as the ones that society deems truly acceptable relationships and women being “allowed” (I hate stating this as it makes women seem weaker or less than, when in fact history, and many religions have deliberately targeted women to make them believe they were not equal to men as women’s power has been historically feared) to be sexual beings. Women then being repressed sexually at a man’s whims and the sexual freedom of free love being ripped from women seen to be a “whore” if contradicted. With each repression and explosion of sexual freedom/exploration occurring, this leads to great advancement within multiple mediums of visual art, and allows for greater historical perception of the sociology of sexuality to continually evolve. “Underly both the general theme that power represses sex and the idea that the law constitutes desire, one encounters the same putative mechanics of power. It is defined in a strangely restrictive way, in that to begin with, this powers is poor in resources, sparing of its methods, monotonous in doomed always to repeat itself” (Foucault, 1990, p.85).

It is feminist artists like Barbara DeGenevieve and Barbara Kruger who are dedicated to changing the oppressive ways our society depicts women and other minority groups that enable us to see the injustices of gender norms.

It goes without saying that visual art, performance, and visual artists are essential to the continuance of human betterment when forced to conform to negative societal norms and stigma. Without visual artists and scholars working on the front lines, a devaluation of society would occur, human beings would cease to continue to evolve, and work towards self-betterment in order to facilitate communal growth. It is feminist artists like Barbara DeGenevieve and Barbara Kruger who are dedicated to changing the oppressive ways our society depicts women and other minority groups that enable us to see the injustices of gender norms. It is through their work, as well as the Guerrilla Girl’s that I recognize, the great importance of creating as a way to aid in facilitating betterment for individuals whom society has historically Otherized. As a working bisexual female visual artist with mental health disabilities, I find it essential to seek to help others via my own creative processes to give joy, confrontation, honest struggle, and open emotion to the viewer/s.